Wherein we fall in love with Dominica

We left Montserrat on Monday, March 19 on a southeast heading towards Guadeloupe. We tried to give the Soufriere volcano a wide berth but still ended up with ash all over our decks (did you know volcanic ash can actually leave rust spots??). After our successful crossing we stayed for a few days in Guadeloupe’s Îles des Saintes, eating delicious food, snorkelling, watching the saga of the French/Irish crew from the boat next to us rescuing a stranded baby goat on shore, having them over for drinks along with the Sea Ya Sail crew to celebrate the baby goat finding a new home on a farm, and trying to not go crazy in a very rolly anchorage. After stuffing ourselves and our cupboards with delicious French food, we left for Dominica on March 25th.

View of the bay

The strong, steady winds made our Saintes–Dominica crossing a quick one, and we reached the town of Portsmouth in the early afternoon. Outside the harbour we were greeted by Titus, one of the PAYS members, who asked if we needed any help. PAYS is the Portsmouth Association of Yacht Security, a fabulous organization that provides services, mooring balls, river tours and security for visiting cruisers. They also helped us arrange island tours, get laundry done, fill our water tanks and even hosted a BBQ for all the sailors in the bay. After clearing in and doing a cursory exploration of Portsmouth by land, we headed to the PAYS BBQ. Since we had just arrived, we didn’t know anyone, but once the free rum punch started flowing, everyone became very sociable. We ate dinner with David and Jennifer, a Canadian/American couple who live on Big Rideau Lake when not here on their catamaran, then the tables were cleared and the DJ started spinning tunes. We chatted with other cruisers and PAYS members, and danced up a storm for the rest of the evening. It may have been a slow start the next morning, but we managed to get off the boat for a tour of Fort Shirley in the afternoon.

View of Prince Rupert Bay and Portsmouth from Fort Shirley

Though never used, these British cannons were set up to keep the French at bay

Since the most interesting parts of the country are inland, Titus had arranged for us to go on a tour of the island with David and Jennifer. The following morning at 8 a.m. we all piled into his colourful fishing boat and were whisked ashore. There, we met Winston, our tour guide extraordinaire for the day. This full-day tour was a crash course in Dominican geography, history, demographics, environment, culture and food. The most immediate history lesson was obviously Hurricane Maria, which hit Dominica head-on last September. The destruction left in Maria’s wake is still very visible and no part of the island was left untouched. Before, Dominica was a nature lover’s dream, known for being lush and green, with striking topography (including seven volcanoes), a plethora of rivers, hot springs and 21 gorgeous waterfalls. While all of this is still there, it has been seriously damaged. From high up in the mountains you get a spectacular view of the valleys below, where the vegetation remains decimated, even 6 months after the fact.

View of the valley

Our first stop on the tour was Titou Gorge. This awesome spot requires donning a life jacket, jumping into icy water, and swimming through a tall, narrow gorge until you reach a small waterfall. It was an amazing experience, and we realized it was one of the few times we’ve been in freshwater since leaving Ottawa.

Swimming through the gorge 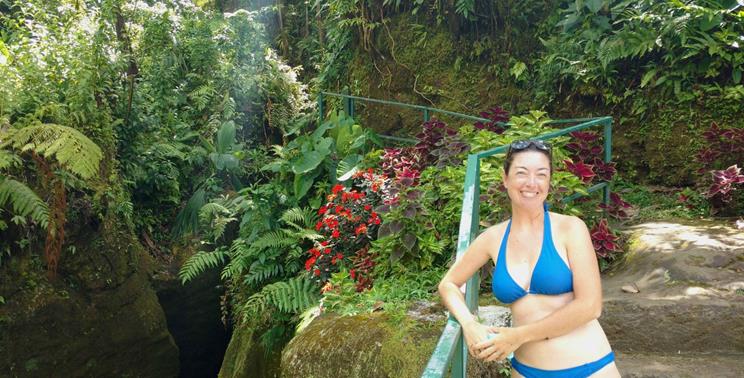 Our next stop was the Emerald Pool, a beautiful waterfall set in a lush green rainforest in the world heritage site Morne Trois Pitons National Park. After a delicious lunch at a local restaurant, we got a personal tour of Pointe Baptiste Chocolate Factory, were able to try a few samples, and came away richer in chocolate-making knowledge (and chocolate!!). We personally recommend the lemongrass and coffee flavours. We hope owner chocolatier Alan Napier gets power back soon so he can get back to making his sumptuous wares. 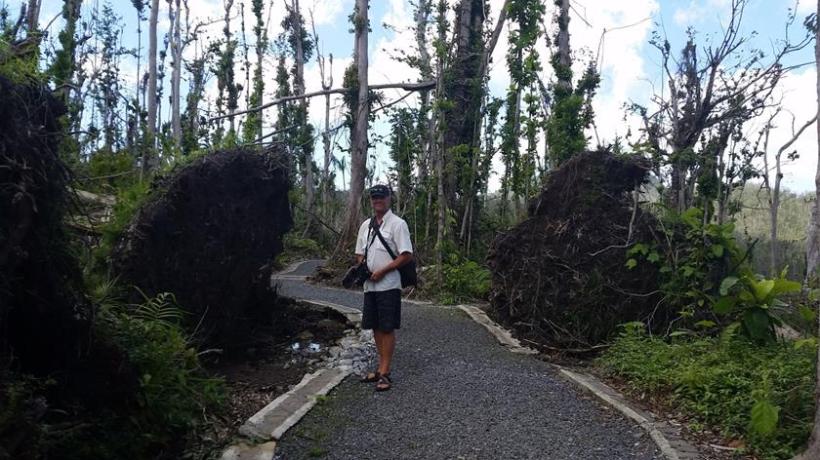 View of the pool from above 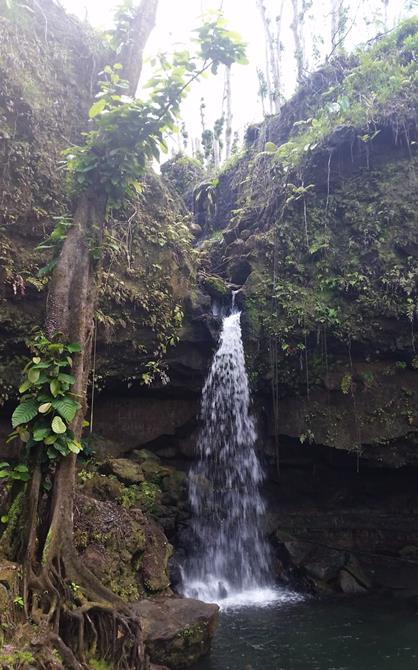 David goes for a swim in the pool

Followed by lunch with a view

Delicious chicken lunch with all the local fixings 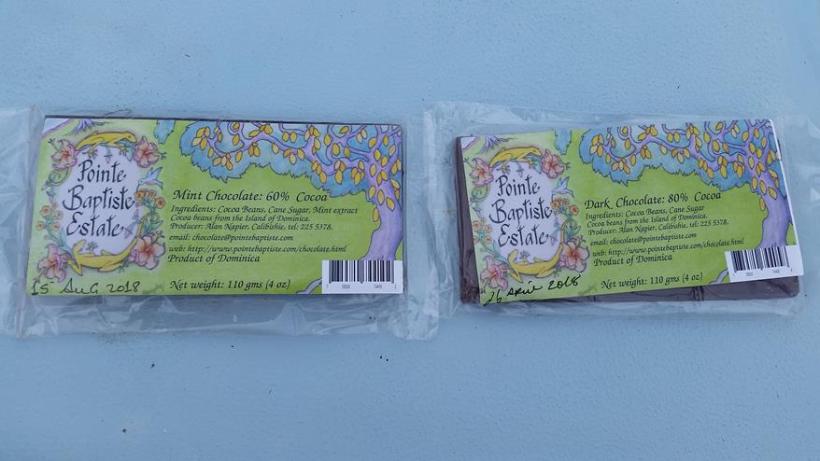 On our last day in Dominica, Titus took us on a boat tour of the Indian River. This protected area is in one of Dominica’s National Parks, so the only way you can visit is with a local guide, who rows you down the river while explaining all the flora and fauna you see. Before Maria, the tall foliage created a canopy overhead, but even with that gone it was still a magical experience (made slightly more magical with a rum punch at the Jungle Bar before heading back). 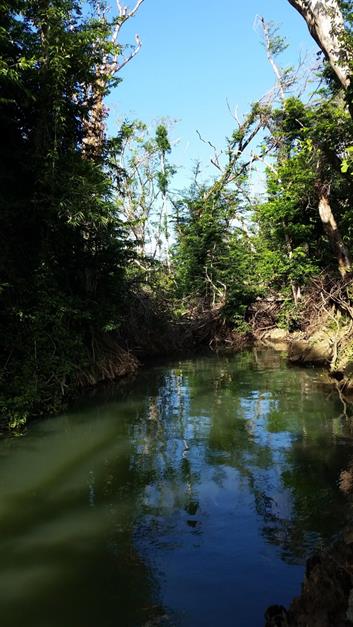 Titus rowing us down the Indian River

During our island tour in Winston’s taxi van the day before, we stopped and picked up a young woman who was waiting for a bus that clearly wasn’t coming. She asked us how we were enjoying the island (loving it, it’s amazingly beautiful) and we asked her how things were coming together after the hurricane. She responded that things are getting better every day, and that right after Maria was the hardest, particularly for the elderly who relied on services that Maria had done away with. According to the Red Cross, “the force of the storm damaged 98 percent of all roofs and swept away 75 percent of the natural landscape.” Many died, and on a small island with only 70,000 people, everyone was affected. Six months later, many homes and businesses are still without electricity and depending on generators for power. The most heartbreaking fact was that Dominica had just been starting to get back on its feet after 2015’s Tropical Storm Erika when Maria hit. The Dominicans have clearly had their fair share of hardship, but if anything it has made them stronger. They are a hard-working and optimistic people with a sense of community that knows no bounds. We have no doubt that they will bounce back, one day at a time*. And we hope to be back one day to see the progress! 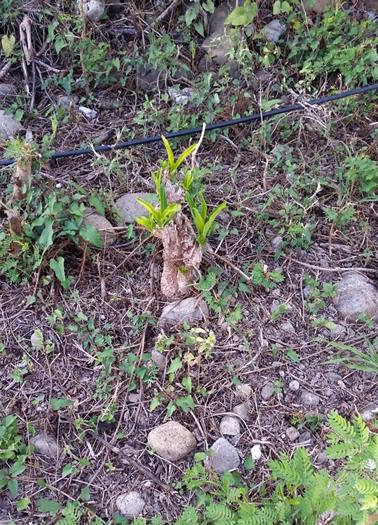 This little plant is already sprouting new shoots, a sure sign Dominica is well on the road to recovery

Where the wind takes us next: Martinique!

* While the best way to help Dominica post-Maria is by going there and supporting the local economy, that’s obviously not always an option. If you’d like to help Dominica recovery efforts, you can always make a donation to the Red Cross or the Dominica Relief Fund.

11 thoughts on “Visiting the Saintes and Dominica”