We arrived in Antigua at 7:30 p.m. on January 8, exhausted and wind burnt after a grueling 13-hour passage from Nevis. We had been warned that this passage was less than ideal, with tradewinds right on the nose for the 50 miles between the two islands. But we did it anyway. We were out of ice and needed a new fridge, and Antigua seemed like the best/closest place to deal with it.

Plus we were already slightly familiar with the island, since we had stopped there on our way to St. Maarten last October.

We were also lucky enough to have a bit of a network there, particularly Norm and Elaine, aka our best friends in Antigua, who conveniently have a dock behind their villa in Jolly Harbour! Guess where we spent most of our time…

Our first order of business was the fridge. We had someone come in and recharge the coolant, but this was just a temporary solution, and our repairman confirmed that the compressor was toast and needed to be replaced. He also shed light on the mystery of the salt water in the fridge situation, explaining that the cold plate is cooled by the brine it contains, which over time tends to corrode through it and leak out. So while the mystery was solved, the fridge problem was not. We looked into buying the fridge cmponents on the island, but discovered that Antigua charges exhorbitant import fees, making the purchase nearly cost-prohibitive. Norm and Elaine’s neighbours, John and Marie, happened to have a portable 12-volt marine cooler that they kindly sold to us. It takes up a lot of space, but provides a temporary solution to get us to the end of the season until we can find a more cost-effective fridge replacement.

I’m sure you’re thinking, hurry up and get to the good stuff. Believe me, that’s how cruising feels sometimes. You just want to hurry up and get back to those secluded little islands where there is nothing to do but eat, sleep, swim and read. But that’s only a small portion of the cruising life in our experience, with the large majority of the time spent on troubleshooting, problem-solving, averting disaster, fixing things that have broken, and identifying the cheapest way to get parts to where you are.

To distract ourselves from the fridge, we spent a day exploring the island in ATVs with Norm and Jamal, our local guide. This was an awesome way to discover inland Antigua, i.e. the parts of the island we couldn’t get to by boat. Plus it was a great opportunity to get a little muddy.

Our tour was organized by Salty Dogs Rentals in Redcliffe Quay, St. Johns 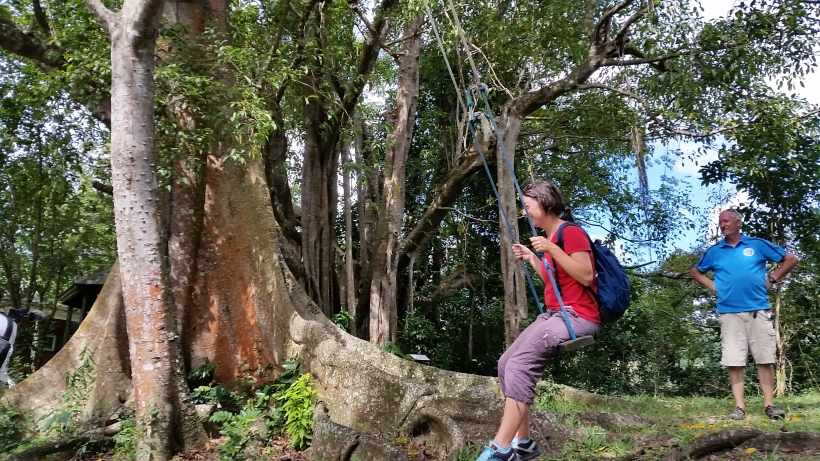 One of our stops by a huge Cottonwood tree 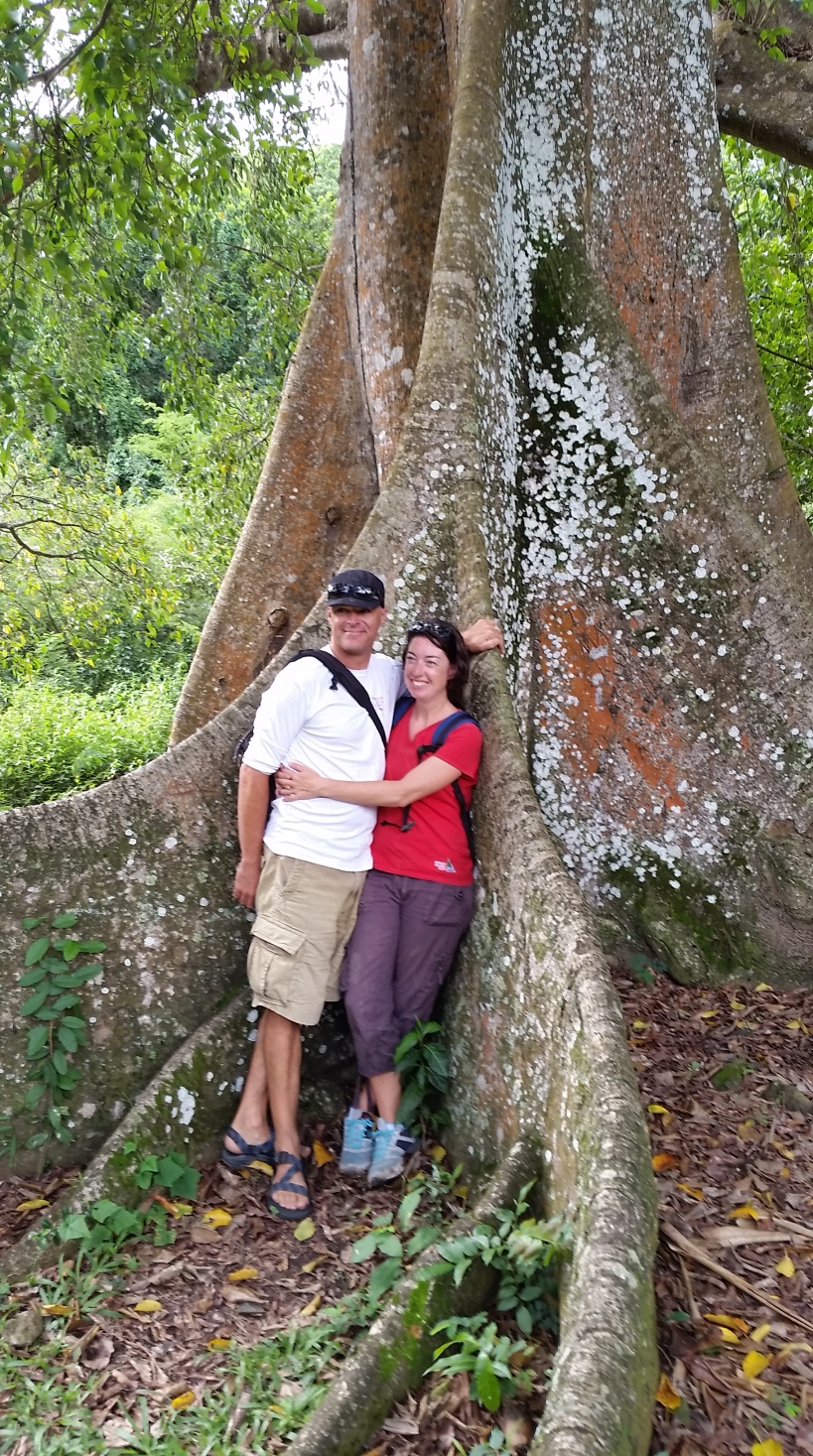 Back at home base by the port, muddy but happy, with our awesome guide Jamal

The next week, to thank Norm and Elaine for their amazing hospitality, we took them and their son Mark out for a sail and a snorkel in Deep Bay, the final resting place of the Andes, a huge three-masted ship that sank there in the early 1900s. It was a great day for sailing, but not s much for snorkeling. The water was so murky that Mel practically swam into one of the masts. Sadly we weren’t able to see much of the wreck, but Deep Bay was still a beautiful spot to stop for lunch, rum punch (Mel has perfected her recipe) and a swim. 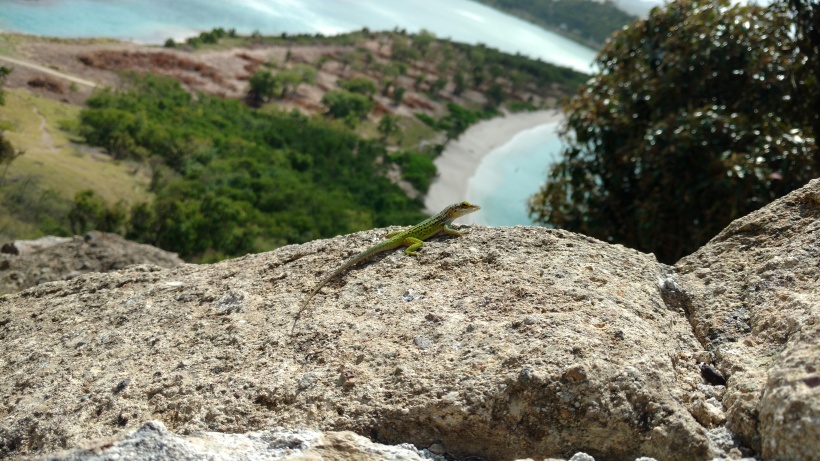 The next day we sailed around the whole island. No seriously. Our first week in Antigua, we had gone to a bar for happy hour and were promply recruited as crew for the Round the Island race. So on January 20, we woke up at 5 a.m. for an 8 a.m. start time. While not our best racing experience (there seemed to be a few too many captains on board), it provided us with an excellent overview of the island and gave us ideas of places we wanted to return to. After the race, we celebrated at Falmouth Harbour, where the race winner was rewarded with his weight in the local rum. 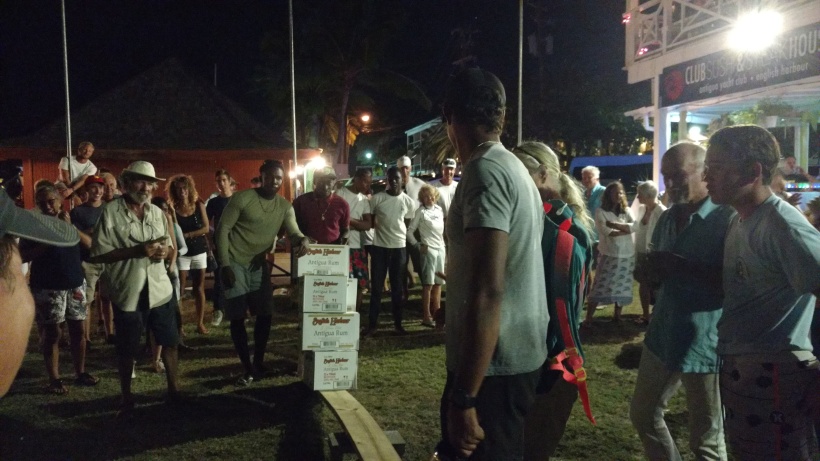 A few days later, our friends Steve and Jackie dinghied over to our boat to let us know they were sailing to Barbuda the next day and to see if we’d like to join them. Antigua and Barbuda are two former British colonies now making up one independent country. Barbuda was hit hard by Hurricane Maria last year, so we figured there wouldn’t be much to see. But we were ready to go where the wind took us, so we got the boat ready to head out the following morning.

We somehow have no pictures of Steve and Jackie, but we have this amazing video of their jack russel, Captain, with a random surfer dude at the Jolly Harbour beach at sunset.

We had an amazing sail to Barbuda, with our speed averaging 6 knots. We anchored between an 11-mile stretch of beach and a big reef, and spent three days exploring both. The snorkeling was the best we’ve experienced to date. The water was crystal clear and the reef buzzing with fish and coral. We swam with sting rays and clown fish and Mel even found herself face-to-face with a pair of barracuda. That certainly gets the heart rate up!

We are now back in Jolly Harbour, doing a bit more boat work before we set sail again at the end of the week. But we will be back to explore more of this island when David’s daughter Rachael arrives on the 18th.

Where the wind takes us next: Guadeloupe!

10 thoughts on “There’s something about Antigua…”