Our first few days in Italy and a weekend in Cinque Terre.

On August 31, we said goodbye to our beloved Fiat 500 rental in St. Raphaël before boarding a train to Genoa, Italy. But not before the great towel debacle of 2017.

All you Douglas Adams fans will understand David’s inclination to always have a towel while travelling. However, Mel never saw the point, particularly when we were trying to travel light, taking only what would fit in a carry-on bag. This has turned into a bit of a running gag between us. After much debate, David had finally bought a towel in France, while Mel refused to do such a thing. 5 minutes before our train was about to pull into St. Raphaël, David realized his new towel was missing. By mentally retracing our steps, we realized we must have left it in the trunk of the Fiat. We spent three minutes arguing over who’s fault it was (“I asked you if you’d checked the trunk”; “You didn’t specifically say that you hadn’t taken everything out”, etc.), and as the train pulled in we realized it was a lost cause and that the towel was forever lost to the rental gods. We boarded the train with David convinced that Mel was orchestrating a great towel conspiracy against him.

Around 9 o’clock that evening we rolled into Genoa. We checked into our nearby AirBnb and since we were starving and had little time to explore other options, ate our first Italian pizza at a restaurant near the station. While we were thrilled to find a pizza with mozzarella di bufala (which David can actually eat), it wasn’t that great and to Mel’s chagrin the house red wine was served practically warm. At this point, Mel was starting to get a little worried. She had never set foot in Italy before and was concerned that she had built it up in her head to the point where she would only be disappointed by reality. Luckily, this was just a one-off, and the next two weeks would certainly meet if not surpass all expectations.

After our late dinner we wandered down to the port, and came upon a street food festival, where we tasted weird and wonderful cocktails and beers from local microbreweries. 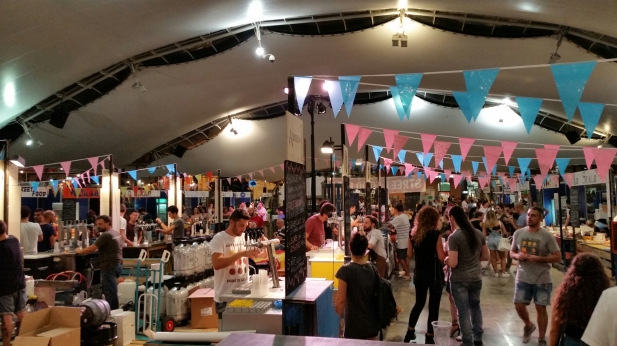 When we got back to our AirBnb, we were surprised to find lights on when we clearly remembered turning them off. As we were changing to go to bed, imagine our surprise when someone walked through the hallway, past our open bedroom door and into the bathroom. As it turned out, we were in a shared accommodation, though Mel had completely forgotten this, and our host had failed to mention it. Oops! It was an awkward way to meet this young German couple, but we had a good laugh about it over breakfast. The next morning we didn’t get to see much of the city as we had a train to catch. We boarded the only train in Italy without air conditioning and headed down the coast of the Mediterranean towards Cinque Terre, the five lands.

Everyone has seen the beautiful pictures of Cinque Terre, with its colourful houses perched on tall cliffs by the sea. We had hoped to see this UNESCO World Heritage Site from the water, but the wind and the waves had cancelled all maritime transportation, so we didn’t see a single boat out on the water during our 48 hours in the area.

Our AirBnb was located in Riomaggiore, the second of the five villages making up Cinque Terre, starting from the south. We spent our first afternoon exploring the town, and of course, eating our first Italian gelato. Interesting gelato fact: the Italians do not give gelato tasters. You just have to pick your flavours and hope for the best. 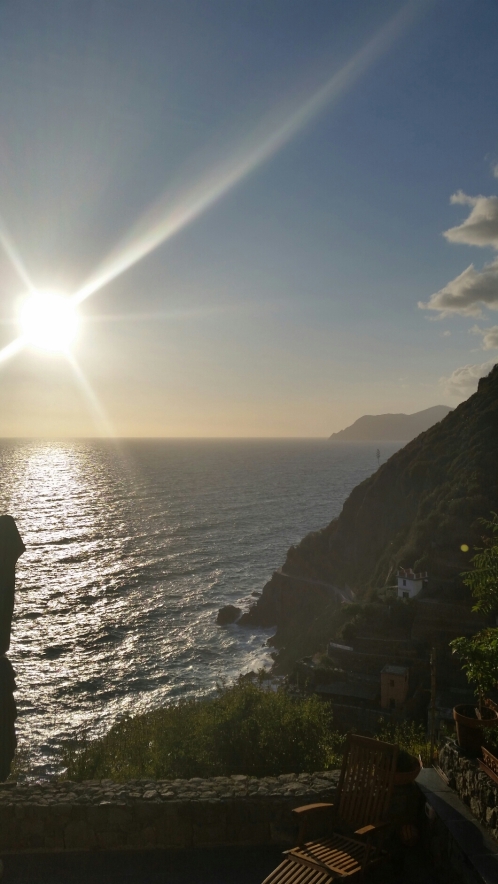 That night we had a fabulous dinner at La Grotta, where we met a fun couple from Australia currently living in England, AND, in a bizarre twist, ran into the very same couple from our AirBnb the night before in Genoa. What are the chances!!?? To add to the bizarre coincidences, the couple that sat across the aisle from us on the train from St. Raphaël to Genoa was again across the aisle from us on our hot train from Genoa to Riomaggiore the next day. Italy is smaller than it seems!

The next day we decided to take the train to the first Cinque Terre town in the north: Monterosso al Mare. From there we hiked for two hours to the next town of Vernazza. We had amazing views the whole way that inspired us to keep going despite the heat.

After our hike in the sun, we were pretty pooped. We grabbed some gelato, got back on the train and headed home to rest. That night we had dinner in La Spezia, got caught in a rainstorm (the first rain we’d seen this whole trip), and took the train back to Riomaggiore for a nightcap. We had a long day ahead of us, with three trains to our next stop: Verona.

Where the wind takes us next: the Veneto region of northern Italy.